Italy’s Serie A holds a special place in the hearts of many football fans. The Italian top-flight was the world’s best league in the late 1980s and throughout the 1990s. The best players graced the pitches of Serie A and the football was the most exciting to watch. Then, in 2006 Calciopoli ruined everything. Top players changed teams within Serie A or left for other countries. Juventus was hardest effected by the betting scandal and after a forced relegation to Serie B, the team found life difficult once back in the top-flight.

Fortunately, things have changed since the lowest point in Serie A’s modern history. Italy is once again a league of stars and exciting football. Often called defensive, Serie A is anything but boring. The league has produced 470 goals after 17 match days. In comparison, the Premier League has tallied 473 after 18 games. German’s Bundesliga has produced 424 goals after 17 matches. La Liga, often seen as the best football in the world due to its great attacking style, has only produced 431 goals after 16 games.

If you want attacking, exciting football mixed with some great food, wine and culture, there’s no reason you should book a trip to Italy in 2018.

The Stadio Olimpico is home to two of Italy’s biggest teams: Lazio and Roma. The two sides play one of the most intense derbies in world football and pack fans into the 73,000-seat plus stadium. Although there is a running track around the pitch, the Olimpico offers a unique setting for football. Add in the sites of the Italian capital, one of the world’s most beautiful and historic cities, and you have the makings of a great weekend trip away. 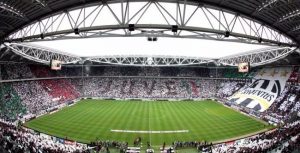 Formerly called the Juventus Stadium, the arena has undergone a recent name change due to sponsorship rights. Opened in 2011, the Allianz is Serie A’s newest venue. It isn’t often teams in Italy own and operate their own stadiums. It’s even rarer to see a brand-new stadium on the peninsula. The Allianz is amazing and it is the mecca for all Juventini. It’s a beautiful place to see a game with no obstructed sight lines. There’s no track or oval shape, so fans are much closer to the pitch than at other Italian stadium. As a city, Turin is a beautifully medieval. It doesn’t have the hustle and bustle of Milan or Rome, but it is definitely a place to stay on holiday. 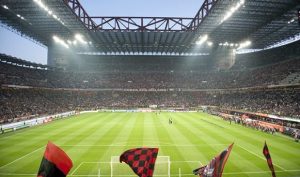 Home to AC Milan and Internazionale Milano, San Siro is one of the most well-known stadiums in the game. The stadium had fallen on hard times, but since both clubs underwent new ownership in recent seasons, the stadium has seen some revitalisation. San Siro is one of the stadiums that is a can’t miss on a trip to Italy. It’s one of the most historic venues to watch a game at on the continent. Add in a visit to the Duomo di Milano, pizza and shopping, and you have the makings of a wonderful weekend to Italy.

Napoli’s San Paolo is an adventure. Opened in 1959, the stadium now seats over 60,000 fans. It isn’t the most spectacular looking stadium in Italy. However, its history, gritty exterior and die-hard fans make it a must-visit stadium. Naples is a jungle of excitement, history and sites to visit. A weekend game can be paired with a visit to Mount Vesuvius for a great trip.

Home to Genoa and Sampdoria, the Stadio Luigi Ferraris is much different than the standard Italian stadiums on the peninsula. Opened in 1911, the stadium is laid out more like an English style venue than other Italian stadiums. Fans are right up against the pitch and the atmosphere inside the “Marassi” is electric. The port town of Genoa is gritty and in your face; but it is beautiful in its own way. The city’s layout and architecture is unlike other Italian locations.