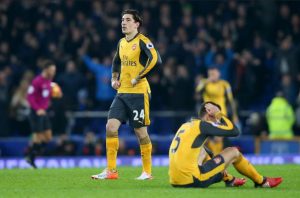 Back-to-back defeats at Everton and Manchester City saw a nine-point gap open between Chelsea and Arsenal, with the Gunners slipping to fourth.

It’s a familiar feeling for supporters with title hopes seemingly evaporating before Christmas. Repeated failures over the past decade are eroding the goodwill toward Arsène Wenger’s tenure and there’s a sense this may be his last year in charge of the club.

The pattern of the two matches was remarkably similar. Arsenal took a deserved early lead and were relatively untroubled until five minutes before half-time. They didn’t concede but a late flurry of pressure from the home sides gave them hope.

At City, Arsenal’s tactics were baffling. Theo Walcott’s goal came from a swift counter-attack based on short passes. After that, they resorted to a long-ball game which made no sense with Alexis Sanchez at 5’5. Olivier Giroud at more than 6’; yes, we see that working. Alexis, half-a-foot shorter; no, it doesn’t work.

More importantly, it gave City possession and put the defence under more pressure. In the end, that told and Arsenal lost. As much as the players take their share of responsibility for the performance, so does Wenger.

Arsenal need a good set of results from the Christmas period (Arsenal v West Bromwich Albion and Arsenal v Crystal Palace matches) to make up lost ground in the unlikely event that Chelsea, Liverpool and City drop points. It’s not a good situation for the Gunners and raises the uncomfortable spectre that neither Alexis Sanchez or Mesut Ozil will renew their deals.

The Chilean warned the club he wanted to see their ambition to win the title and Champions League. There isn’t much evidence that of that now.

Grim times at the Emirates with little sign of a fairy tale ending.