Chelsea and Barcelona have had numerous memorable encounters over the last 18 years in the Champions League. The two football giants have played 12 times during the nearly last two decades in the competition. The Blues have won just four of those meetings between the teams while losing three. 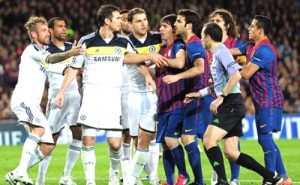 History doesn’t bode well for Chelsea going into their February 20th first leg fixture. The Blues may have performed well against Barcelona at Stamford Bridge, but the West London side hasn’t won at Camp Nou. Antonio Conte’s men will need to play well in the Champions League knockout stage first leg before heading to Barcelona for the second fixture.

Recent history of Chelsea and Barcelona

The last time these two teams met in the Champions League was in 2011-12 semi-final. Chelsea won the first leg at Stamford Bridge, 1-0, thanks to a Didier Drogba goal. The second leg was far different as Chelsea were unable to weather an early Barcelona goal storm. Sergio Busquets and Andres Iniesta opened the scoring for Barcelona in the first half. Chelsea’s Ramires pulled one back before the half-time break. Chelsea were able to withstand Barcelona’s pressure in the second period. Then, in dramatic fashion Chelsea’s Fernando Torres found himself free against Barcelona goalkeeper Victor Valdes, and the striker tallied a 90th minute goal to send Chelsea through on aggregate, 3-2. The Blues, under Roberto Di Matteo, went on to lift the Champions League trophy with a win over Bayern Munich on penalties.

The most famous meeting between Chelsea and Barcelona came in 2008-09. Under manager Jose Mourinho, Chelsea held Barcelona to a 0-0 draw at Camp Nou in the first leg. The tie then went to Stamford Bridge with Chelsea believed to be the stronger of the two teams. This was a time before many in the English media knew much about Barcelona’s Lionel Messi, and few in the United Kingdom knew about the magic the Argentine could create.

Chelsea scored the game’s opener in the ninth minute thanks to a fantastic goal from Michael Essien. The controversy started after Essien’s goal as match official Tom Henning Ovrebo denied Chelsea several clear penalties and fouls. His performance was called into question by many and it left commentators speechless. Meanwhile it left Chelsea fans and players in hysterics.

Due to Ovrebo’s inability to award Chelsea legitimate penalties and fouls, Barcelona were able to level the score in the 90th minute thanks to a wonder-striker from Iniesta. The goal saw Barcelona through to the final where they defeated Manchester United.

Chelsea and Barcelona have plenty of history; and February’s first leg fixture at Stamford Bridge will be just as explosive as their previous games.

Want to see Chelsea and Barcelona at Stamford Bridge? www.WoWTickets.Football as your seat in West London. Contact us now for the best seats.