The FA Cup will enter the quarterfinal stage on March 17th and 18th. Seven of the remaining eight teams come from the Premier League. Wigan Athletic, winners of the FA Cup in 2013, are the only non-Premier League side left in the tournament. Wigan are currently third in League One and have their eyes on promotion back to the Championship. The team defeated Premier League leaders Manchester City in the last round and now have a date with Southampton in the last eight.

The FA Cup quarterfinal weekend is right round the corner. How do the eight teams stack up? 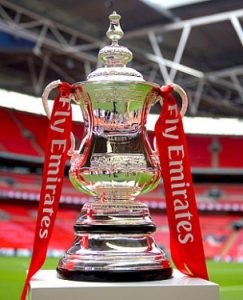 Swansea host Tottenham in the first of the FA Cup quarterfinal matches. Swansea have turned their season around since Christmas. It all began with the hiring of former Sheffield Wednesday manager Carlos Carvalhal. The Portuguese boss has guided the team from the bottom of the Premier League table and into relative safety.

This fixture is a re-match of the 1983 final won by Manchester United. The Red Devils go into the fixture with a full slate of matches upcoming. Premier League, Champions League and FA Cup fixtures fill the team’s calendar. The Red Devils will be buoyed by massive support at Old Trafford as the team aim to win the FA Cup for a 13th time. The Red Devils won the trophy back in 2016.

Wigan knocked off Manchester City in the last round of the FA Cup thanks to a Will Grigg goal. The team have been handed a slightly easier fixture on paper. Southampton are struggling for Premier League survival. Currently, one point outside of the relegation zone, the Saints may have their eyes on the league rather than the cup. Wigan could make the semifinal for a second time in five years.

The last match of the quarterfinal round sees Leicester City host Chelsea. Leicester are comfortable in the Premier League, and the Foxes have had their eyes on the FA Cup trophy since the tournament began in January. Leicester have played lower league opposition throughout the FA Cup this year, and the Foxes will get a much bigger challenge against Chelsea on March 18th. Chelsea could see fixture congestion play a big part in this fixture. The team is fighting for a top four Premier League finish and the Champions League as well. Antonio Conte’s big money summer signings of Alvaro Morata and others haven’t come off. The manager is expected to leave in the summer, and an exit from the FA Cup and Champions League could hasten Conte’s departure.

The FA Cup quarterfinals will take place March 17th and 18th. Don’t miss out on the live football action. Get your FA Cup tickets now!