How to Enter Anfield and Finding Your Seat? 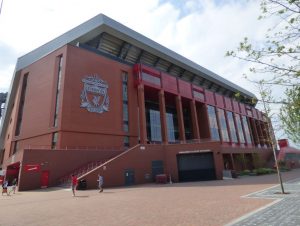 First-time visitors to Anfield and those who have not been to the stadium for a long time are likely to have a range of questions about the experience they can expect at the stadium.

Anfield’s atmosphere is famous around the sporting world but there are lots of things you should keep in mind before heading to Liverpool for the big game.

This is the ultimate guide on how to enter Anfield and find your seat inside this famous stadium.

What to Expect When Entering Anfield?

So you got your Liverpool FC tickets in hand and now your heading to the stadium. Anfield, like any major sporting venue nowadays, has restrictions on what can be taken inside. Large bags, holdable and suitcases cannot be taken into Anfield and the stadium does not have a left luggage facility, so keep this in mind if you are travelling to the game from a long way away. 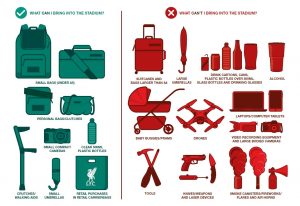 Permitted Items to Carry Into Anfield

Small bags are allowed as long as they are no larger than A5 but they are going to be searched by staff on entrance, so factor this into the time you are allowing to get to Anfield and make your way to your seat. Fans can only take one bag each into the stadium for a game. Security staff may also conduct body searches before allowing you to go through a turnstile and into Anfield.

Alcohol cannot be taken into the stadium and banned items include weapons of all kinds, tools, air horns, flares, drones, large umbrellas and video recording equipment. Personal bags are fine to take into Anfield, while small umbrellas are permitted as well as small compact cameras and clear 500ml plastic bottles.

Anfield even has Wi-Fi available so you can get online before kick off or at half-time. To get access, you will need to connect to the ‘Fan Wi-Fi’ network and register for the free service.

Which Turnstile to Use to Enter Anfield? 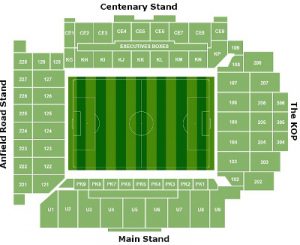 Anfield is a very big stadium and there are a lot of different turnstiles around the ground. So, it depends which stand your ticket is for which turnstile you will be using to gain entry. Fans with tickets for the famous Kop stand will use turnstiles B-F while G-K are for the Kenny Dalglish Stand, which used to be known as the Centenary Stand until a couple of years ago.

The Anfield Road Stand is served by turnstiles L-Q while ground-level turnstiles S or W are the right ones to use for the Main Stand Upper level. Those who are seated in the Lower level of the newly redeveloped Main Stand should use turnstiles T or V. Turnstile T is next to the Hillsborough Memorial, which is a vital place to visit for any Liverpool fan, young or old.

Whatever format your ticket for the big game is, card, paper or eTicket, it will have details of the turnstile you need to find to gain entry to the stadium.

What to do When Going Through a Turnstile?

First-time visitors to Anfield or fans who are going to a game for the first time may be unsure of exactly what they need to do to go through the turnstile.

Each turnstile has a scanner that is used to gain access. Your ticket will have a barcode on it that is read by the turnstile’s scanner, resulting in the gate being opened.

Enter your ticket barcode-first into the scanner and the light will then turn green. After that, push through the turnstile to get into Anfield and on to the concourse.

Concessionary tickets such as those for children will result in a yellow light, rather than green. Membership cards and season ticket cards are scanned in exactly the same way as a ticket.

Finding your seat when entering Anfield

Going through the turnstile named on your ticket will put you through the entrance that gets you the closest to your seat inside the ground.

Signs inside the concourse – where you can buy food and drink – will then point you in the right direction to the correct stairway to take to move into the inside part of the stadium.

Lots of stewards will also be on hand to direct you in the right way to go to your seat and let you know if you have made it through the wrong entrance.

Will I Get Wet if it Rains at Anfield?

The vast majority of Anfield’s seats are covered but, in the event of bad weather, there is a chance that supporters could be exposed to the elements.

Despite the area being redeveloped more recently than any of the other stands, fans near the front of the Main Stand are likely to get wet if it rains during the game.

Ticketholders sitting in the Kenny Dalglish Stand could also be exposed to weather conditions if they are close to the pitch, so it is advised to take a light waterproof jacket, just in case.

Although the roof of the Kop stand has been trimmed back in recent years it still provides enough protection to keep fans dry in the event of rain – unless a strong wind is also blowing!

Snow is also a possibility during the winter months so make sure to check the weather forecast before travelling to Anfield and wear appropriate clothing to stay warm and dry at Anfield.

Guide to Anfield for Away Fans

Away fans are situated in the lower tier of the Anfield Road Stand, which is opposite the Kop and in the middle of redevelopment proposals from the club (Nov 2019). 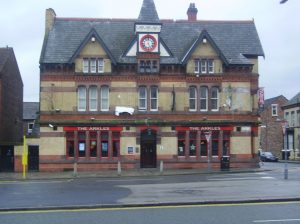 The typical allocation for opposition supporters is around the 2,000 mark but those who are seated near the front of the stand could get wet in the event of it raining during the game.

Some of the seats near the back of the lower tier are also classed as having a restricted view because of the overhang of the upper tier – so keep this in mind when buying tickets.

Furthermore, as away fans tend to stand up throughout the game this is likely to have a further impact on supporters having a good view of the pitch.

Food and drink options are typical of a British football ground with the local delicacy known as Scouse Pie among the items on the menu that can be bought for quite a reasonable price.

Beers can be purchased inside the ground for around the £4 mark and most of the pubs found around the Anfield area allow away fans to enter, though you may have to cover up any colours. “The Arkles”, which is moments away from the stadium, is one of the typical pubs for away fans.