How to Get to Old Trafford and Leave After the Match

Old Trafford remains the biggest club ground in British football despite other clubs expanding or building new stadiums and a visit to the Theatre of Dreams is still awe-inspiring. 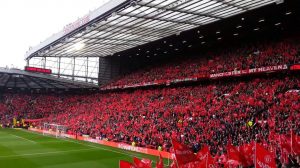 History is present in every corner and crevice of this famous old stadium, which has been gradually developed to its current capacity of around 75,000 supporters.

Those who have never been to see Manchester United play at Old Trafford, or who last visited a few years ago, may therefore be a little daunted and unsure of what to expect from the stadium.

Our complete guide to visiting Old Trafford for a Man United game, tells you everything you need to know, complete with our personal recommendations to make it a perfect day out for all fans.

Getting to Old Trafford by Train, Bus or Tram

Old Trafford is very well connected and easy to reach from most places in Manchester city centre within about half an hour, although public transport gets very busy on matchdays.

The stadium itself has a railway station called Manchester United FC very close by, but this is not currently in use, so the city’s tram service is the best way to get to the game right now. Metrolink’s tram service is fast but does get busy on matchdays. Stops at Trafford Bar, Exchange Quay, Salford Quays and MediaCityUK are all within 20-minute walk.

We think “Trafford Bar tram stop” (located at Seymour Grove, M16 0TG) is arguably the best route, with trams available to both of Manchester’s main railway stations – Piccadilly and Victoria – as it tends to be quieter than other options. Old Trafford is in Zone 2 for the tram system and tickets can be purchased on the platform, or you can use a contactless card to tap in and out during your journey, like on London’s Underground.

Free parking around Old Trafford is limited, but there are official car parks at the stadium itself that cost from £10 per space. It can take time to get out of them after the game is over, though, while there is a lot of traffic around the stadium on a matchday to take into account as well.

We like using the park and ride option for games at Old Trafford. Direct trams to either Old Trafford, Trafford Bar or Exchange Quay are available from Sale Water Park, Ladywell, East Didsbury, Ashton Moss and Ashton West – these all have hundreds of free spaces to use.

Alternatively, Old Trafford is reachable on foot from the city centre in about an hour, while cycling is another option as there are bike racks at the N2, E2 and W2 car parks at the stadium itself.

Getting to Old Trafford by Plane

If you are flying into a London airport such as Heathrow you will need to get a train to Manchester. Euston to Manchester Piccadilly takes a little over two hours on a train. To reach Euston from Heathrow, take a Piccadilly Tube to Green Park then change to the Victoria line.

From Gatwick, the journey is a little longer. You need to get a Southern train to Victoria, then get on the Victoria line to Euston. Advance tickets are the cheapest way to travel by train in the UK and they are typically available from around 12 weeks before the departure date.

What Items Can I Bring with Me into Old Trafford Stadium?

Be aware that you cannot take bags larger than 20cm x 15cm x 5cm (8″ x 6″ x 2″) into Old Trafford, so you may need to leave them at your hotel if you are staying over. An exception to the bag rules is United Megastore carrier bags that contain newly bought merchandise. Alternatively, there are left luggage facilities that can be used at Manchester Piccadilly station.

Small handbags are fine to take inside – although they will be searched – and there are bag-drop facilities around the stadium. They cost £5 a bag and can be found in the E2, W2 and N2 car parks. Anyone taking a bag is recommended to aim to arrive about two hours before kick-off, while leaving the ground will be delayed by having to collect the bag on your way out as well.

What Time Should I Arrive at Old Trafford?

When visiting Old Trafford for the first time, aim to get there around two hours before kick-off to start soaking up the atmosphere. But it is recommended to enter the stadium only 30 minutes before kick-off if you’re using a ticket that was purchased on the secondary market. There are plenty of fast food trucks in the vicinity of the stadium so you can grab something to eat, while there is a fan zone at the Lancashire County Cricket Ground, which is less than 10 minutes away by foot and right next to the Metrolink tram stop called Old Trafford. The cricket stadium is also called Old Trafford, which can be confusing!

The Old Trafford Megastore is always worth a visit to check out the latest merchandise. It can be found in the East Stand and there is more than 800 product line on sale in the shop. Over 10,000 fans enter the Megastore every single match day!

If you are going to a game at Old Trafford for the first time, we recommend considering booking the club’s interactive Matchday VIP Experience, which includes access to the Museum three hours before kick-off. For the price, fans also get a ticket in the “Sir Alex Ferguson Stand”, a drinks reception, a buffet meal, a complimentary bar and entertainment including a magician, a freestyle footballer and a former player Q&A. It is well worth the money, believe us!

Unfortunately, the Museum & Stadium Tour is not currently open on a home matchday unless you book a ticket for the Matchday VIP Experience.

Monuments Outside the Stadium

Also take some time to have a walk around the outside of the stadium, visiting sites such as the Sir Matt Busby statue, the Munich clock and the statue of Sir Bobby Charlton, George Best and Denis Law. The Munich Tunnel, which goes underneath the South Stand, also hosts displays to those who lost their lives in the 1958 plane crash and should be visited by all United fans at least once. Near the Munich Tunnel, at the East Stand, there is a cash machine that is free to use.

Buying Food and Drinks on the Concourse

The club recommends arriving at the turnstiles an hour before the game. All fans are searched before entering. On the concourse, you can buy food and drink including a United pie – which is very spicy! – while there are vegan and vegetarian options too. Beers cost up to £5 while there is a combo offer of two snacks, two hot items and two drinks for £15, which is very good value.

Leaving Old Trafford After the Game

With up to 75,000 supporters attending all of United’s home games, it naturally takes some time to leave Old Trafford after full-time. It gets very, very busy outside the stadium after any game, so factor in plenty of extra time if you have a train or a plane to catch after the match.

Trafford Bar tram station is probably the best tram stop to use after the game as it does not get as busy as the others close to Old Trafford, although it does depend on where you are heading. You can get to either Victoria or Piccadilly railway stations from Trafford Bar within around 20 minutes or so.

Many fans like to leave a little before full-time in a bid to beat the traffic but United are famous for scoring late goals, so you are risking missing some memorable action if you do this!

Fans heading to Manchester Airport after the match should take a tram to Manchester Piccadilly train station, where trains to the airport run from. Journeys from Piccadilly are about 20 minutes.

Manchester is one of the world’s great cities, so there is a huge amount to see and do either before or after taking in a Manchester United game at Old Trafford. On a matchday, heading to one of the pubs near the ground to enjoy the bubbling atmosphere is a must. 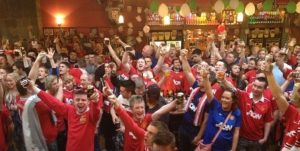 Pubs Close to the Stadium – The Trafford & the Bishop Blaize

Both “The Trafford” and the “Bishop Blaize” pubs are within a few-minute walk away and are packed with home fans singing their favourite songs in the hours before kick-off. They only let fans with tickets in on matchdays. Between the two pubs, there are plenty of fast food places to grab something quick to eat before the game as well.

More Places to Hangout on the Salford Quays

If you are arriving via Salford Quays we recommend checking out “The DockYard at MediaCity”. It has a full bar menu and a great range of craft beers to try out. The Matchstick Man at Salford Quays tram stop is another option for a drink before or after a game at Old Trafford. Also, at the Salford Quays are excellent bars including “Craftbrew” and “Lime”, as well as the “Lowry theatre”.

If you have time before or after the game and you’re not in a rush to leave Manchester right away then one of the places you should definitely check out during your time in Manchester is the “National Football Museum”, which has some fun interactive games and regularly changing exhibitions. 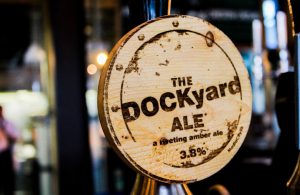 Manchester is famous for bands such as “Oasis”, “Happy Mondays” and “The Smiths”, so check out listings for local gigs if you want to see some live music during your visit to the city. “Manchester Arena”, “Manchester Academy” and the “Apollo” host big-name stars while acts on the rise can be caught at venues such as “the Deaf Institute”, Band on the Wall and Sound Control.

One of our favourite places to visit when seeing Manchester United play is “Cane & Grain” on Thomas Street – their ribs are to die for – and you are spoiled for choice when it comes to restaurants. “Rudy’s Neapolitan Pizza” offers an authentic slice, fine dining is on offer at “Mana”,

“Alston Bar & Beef” has amazing steaks and “63 Degrees” is a great Paris-style brasserie.

Nightlife options are very varied in Manchester, so there is something for everyone who wants to enjoy a late one. “Bijou” caters for the elite, “Hidden” is famous for its raves, South hosts indie nights and the city’s LGBT community is centred around Canal Street, near Piccadilly station. For amazing views go to “Cloud 23”, a cocktail and champagne bar high up in “Beetham Tower”.

Places to Stay Near Old Trafford

Manchester United fans planning to stay over should think about booking a room at “Hotel Football”, which is right next door to Old Trafford and offers views of the stadium. It is part-owned by United legends Ryan Giggs, Paul Scholes, Nicky Butt and the Neville brothers. The hotel is home to Old Trafford Supporters Club, which is well worth checking out on a matchday, while the same five ex-players also own “Cafe Football”, which is at the “National Football Museum”.

Budget chains Premier Inn and Travelodge both have sites close to Old Trafford as well as across Manchester city centre and are a good choice for those hoping to keep costs down, while the Ibis at Pollard Street is another alternative option.

“Hotel Gotham” is an iconic five-star option in the heart of the city centre, with Manchester city centre’s best hotels also including Dakota, King Street Townhouse and The Midland, which hosts the amazing restaurant, “Adam Reid At the French”. And if you want to stay where Jose Mourinho lived during his time in charge of United, book a stay at the “Lowry Hotel”! It has a spa and the hotel’s River Restaurant is a great place for a memorable pre-match meal as well.