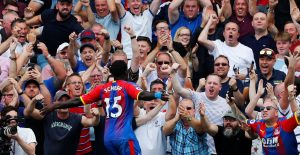 Selhurst Park is one of the Premier League’s traditional stadiums and it is well worth a visit to see Crystal Palace in action.

The Eagles are roared on by one of the best atmospheres around, so the game is sure to provide a memorable experience for visitors.

Plans to expand the stadium are under way, but here is our ultimate guide to visiting Crystal Palace’s Selhurst Park for the first time. So, if you already got your Crystal Palace tickets, read through this guide and get ready to head for the match.

Getting to Crystal Palace’s Selhurst Park by Train, Bus, Tube or Taxi

Fans using public transport to get to Selhurst Park should note that Crystal Palace station is actually located two miles from the ground, with Selhurst, Thornton Heath and Norwood Junction stations all better options found within a 15-minute walk.

From most places in central London it will take between 30 and 60 minutes to get to Crystal Palace’s Selhurst Park, with Southern trains running to Selhurst station and Norwood Junction station from London Victoria and London Bridge respectively.

Selhurst Park is also easily reachable by bus from all parts of London. The 468 and the X68 both go close to the stadium on Whitehorse Lane. London cab firms Addison Lee and Carlton Cars can also be used to get to Crystal Palace matches, and they will drop visitors off at the corner of Park Road and Whitehorse Lane.

Like most Premier League stadiums in London, car parking close to Crystal Palace’s Selhurst Park is very limited and public transport is almost always the best way to get to the game.

Most nearby streets only have parking for permit holders, so visitors should use sites such as JustPark, Your Parking Space or Primal Parking to find somewhere local to leave their car.

Disabled supporters can park in Sainsbury’s car park, which is right next door to the stadium. It is also possible to use a park and ride option when travelling to Selhurst Park for the big match. Various stations have plenty of parking and can be used to connect to Crystal Palace’s stadium.

Getting to Crystal Palace’s Selhurst Park by plane

As one of the world’s great cities, London is connected by a number of major airports. Heathrow is the biggest of them and is about an hour and a half away from Selhurst Park.

To get to the stadium from Heathrow airport, guests should use the London Underground. Take the Piccadilly line to South Kensington then change for the Circle line to Victoria. From there, football fans can use a Southern train to get to Selhurst station, which is a 10-minute walk away.

Gatwick airport is even closer to the stadium with the typical journey time from the airport less than an hour. Catch a Southern train to East Croydon then get on the 410 bus to get to Selhurst Park.

Those flying into London City airport should use the DLR to get to Shadwell, then change to the Overground to Norwood Junction, which is less than 15 minutes from the stadium.

Supporters can bring a bag or backpack into Selhurst Park, while at Entrance 9 the club’s Information Centre runs a free-to-use left luggage facility for fans as well.

What Time Should I Arrive at Crystal Palace’s Selhurst Park? 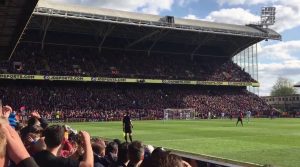 Guests travelling to Crystal Palace’s Selhurst Park should always leave plenty of time when planning their journey as traffic and public transport both get very busy on match days.

There is a Fanzone area at the stadium (located outside the Main stand’s reception) where fans can congregate before the game to enjoy food and drink with their fellow supporters, so this is well worth checking out.

Those who want to get inside nice and early can also take advantage of an early bird offer on the concourse, with £7 getting fans a beer as well as a hot dog, cheeseburger or Tuscan bean pie.

Selhurst Park sells a special Palace beer that is available to buy for a reasonable £5 per pint – it is well worth trying it out if taking in a Crystal Palace match. Please note that the stadium is cashless, though Apple Pay and Google Pay can both be used.

With more than 25,000 supporters leaving Crystal Palace’s Selhurst Park after the game, the roads around the stadium naturally get very busy and public transport will get congested too.

Checking out the club shop in the Fanzone after the game is over could be a good way to let some of the crowds disperse, as well as giving guests the chance to buy some merchandise.

Selhurst, Thornton Heath and Norwood Junction stations are all within an easy walk of the stadium and can be used to get back into central London after a Crystal Palace match.

South London is a cosmopolitan area that is well worth exploring before or after a game at Crystal Palace’s Selhurst Park, while the bright lights of central London are not far away either.

The White Hart pub is a good place to visit for lunch in Crystal Palace, while Thornton Heath High Street has plenty of options for food and drink before and after the game as well.

Perhaps the nearest place to grab a drink near the ground is the Prince George pub, which admits home and away supporters, has a lively atmosphere and shows live Sky Sports as well. The Alma and the Holmesdale are two of the other local pubs that tend to be full of Palace fans when it is a day there is a match being played at Selhurst Park.

Anyone who has an interest in trying out as new curry should head to Santok Maa’s Bhel Poori House on Thornton Heath High Street. Great for kids, the Indian restaurant specializes in its chaat and bhajias, which are both out of this world.

The area around Selhurst Park is quite residential and quiet, so visitors might wish to consider heading into central London for more entertainment options after the match.

Places to Stay Near Selhurst Park

Croydon, which is about a mile or two away from Crystal Palace’s Selhurst Park, has a few different accommodation options and these are likely to be among the closest hotels to the stadium itself. Croydon has a Premier Inn, Jurys Inn, Best Western and Hampton by Hilton, so there are options to suit all kinds of budgets in this part of south London.

Crystal Palace B&B is one of the nearest places to stay, with the accommodation located within easy walking distance from the stadium and just 650 yards from Crystal Palace Park.

Anyone who is jetting into the capital city for more than a Premier League game at Crystal Palace’s Selhurst Park may wish to instead book a break in a more central area of London.

The city is home to some of the very best hotels in Europe, if not the whole world, with a personal recommendation being a stay at the Savoy hotel, which is a five-star hotel in a fantastic location, right next to both the River Thames and Covent Garden. Those who stay in a suite will even be treated to a butler service – what could be more London than that?