West Ham’s London Stadium is one of the newest places to watch Premier League football. 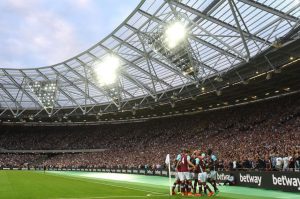 The stadium, which was converted after it was used for the 2012 London Olympics, is located in east London, a rapidly developing part of the city.

West Ham game tickets are a popular choice for those who want to take in a Premier League game during their time in the capital.

Our ultimate guide to attending matches at London Stadium tells you all you need to know.

Getting to West Ham’s London Stadium by Train, Bus or Tube

London Stadium is very well connected and there are a lot of ways to get to the game. Stratford station is the recommended route from the club as it has a large capacity. Pudding Mill Lane station and Hackney Wick station are alternatives around 10-minute walk away, connecting fans to the Docklands Light Railway (DLR) and London Overground respectively.

The stadium can be found in the south of Queen Elizabeth Olympic Park, next to the UK’s largest sculpture, the ArcelorMittal Orbit, which was created for the 2012 Games.

Fans travelling to West Ham’s London Stadium are encouraged NOT to drive as there is no public parking available in the area apart from 49 accessible parking spaces at the ground itself.

Stratford Westfield located on Montfichet Road, Olympic Park East London LONDON E20 1EJ, is one of the closest places to park, or drivers can opt to park and ride by leaving their car at a London Underground station and taking the Tube to the game. 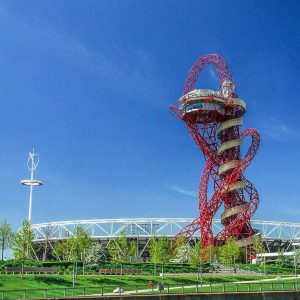 In addition, cycling is an option for getting to West Ham’s London Stadium as the London Cycle Superhighway has recently been extended from central London to Stratford City. There are several docketing stations for bikes located across Queen Elizabeth Olympic Park.

Getting to West Ham’s London Stadium by plane

London is served by several airports, so international visitors heading to West Ham’s London Stadium have a lot of options.

From Heathrow, football fans should take the Piccadilly line on the London Underground to King’s Cross St Pancras, then catch a Southeastern service to Stratford International.

Only small bags and handbags are allowed inside London stadium, so if you are staying over you may want to drop off luggage at your hotel before heading to the game.

Bags will be subject to security checks and there is a left luggage facility at Kings Cross St Pancras station that can be used by football fans too.

What time should I arrive at West Ham’s London Stadium?

Queen Elizabeth Olympic Park is a beautiful place to spend some time before and after the game, we recommend fans arrive 30 minutes before kick-off on matchdays.

Arriving early will enable fans to avoid some of the busiest public transport in the area as well. West Ham’s London Stadium has excellent food and drink options on the concourses, including locally sourced Wicks Manor sausages, nachos, chicken and vegetable skewers.

London Stadium is also home to the only in-bowl bar in the Premier League and drinks options include our own recommendation, the special West Ham ale that was specifically brewed.

The Stadium Store sells West Ham merchandise and is also home to a smart cafe, the West Ham United Coffee Co, which is also open on matchdays.

With almost 60,000 fans trying to leave the site at the same time, crowds are expected when leaving West Ham’s London Stadium.

Designated routes to Stratford Station are in place to enable all supporters to get away from the stadium as safely as possible. Stop and go signs are in place to help ease congestion.

Since West Ham left the Boleyn Ground for London Stadium, the club has been working hard on providing places for fans to hang out before the game. The Heineken Bar, which can be found opposite Billy Bonds Stand Block 136, is popular and has a live DJ for the hours before kick-off.

With the stadium only a short journey from the heart of London, many supporters prefer to congregate away from Queen Elizabeth Olympic Park then head to the stadium for the game.

The Stratford, which is inside Olympic Park, has high-quality food options including Allegra and the Stratford Brasserie for those who want to splash out, while the excellent seafood restaurant Cornerstone is near to Hackney Wick station. Crate Brewery & Pizzeria is also worth checking out if you want to pick up a slice and a pint. 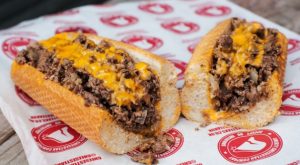 Many fans head to the massive shopping centre Westfield Stratford City before or after the game. There are a huge number of shops, a cinema and a bowling alley inside as well as a vast choice of bars and restaurants. Our recommendations include sushi from Umai by Japan Centre and Passyunk Avenue, which serves authentic Philly cheesesteaks and PBR.

The bar at Las Iguanas inside Westfield Stratford City is open from 11am on matchdays too. After the game, you could even try your luck at Aspers Casino within the centre. The casino also hosts Clary’s Restaurant, the 24-hour Tanzibar Sports Bar and Sky Bar, which a cocktail lounge that is on the top floor and offers great views across London.

There is plenty of choice when it comes to staying the night either before or after a game at London Stadium. Budget chains Premier Inn, Travelodge and Holiday Inn all have accommodation options at Stratford, just a 20-minute walk or so away from the ground.

Superb service can be found at five-star hotel Montcalm At The Brewery London City and the East London Hotel. Moxy London Stratford and OYO Epsilon Hotels are affordable choices that can be found within a couple of miles of London Stadium.

Arguably the best hotel in east London is Town Hall Hotel in Bethnal Green, which has been used for filming Hollywood movies including Atonement. The hotel is also home to a Michelin starred restaurant, Da Terra Restaurant & Bar, which is certainly well worth trying out. Chefs Paulo Airaudo and Rafael Cagali have put together a delicious menu for an unforgettable meal.