Saturday Lunch with Manchester United – The Survival of the Fittest 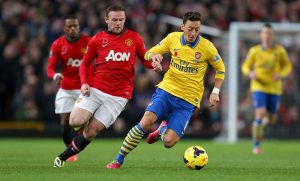 There’s only one place to be this weekend and that’s Old Trafford. Arsenal travel to Manchester United for the Saturday lunchtime showdown which has more subplots than your favourite soap opera.
Indeed, such has the drama been down the years that this is English football’s soap opera. Injuries, fights, dives, red cards, goals galore and even pizza being thrown around; it really has had everything down the years.
This season, there’s a new star; an old face in a new role. Jose Mourinho, Arsène Wenger’s nemesis; the Portuguese manager whom Wenger has failed to beat in fourteen competitive meetings.
No matter what anyone tells you, this is English football’s grudge match and its’ spectacular. Wenger has got under Old Trafford’s skin, Mourinho under Wenger’s; this is the needle we’ve been waiting to spark the Premier League season into life.
It gets more delicious. Zlatan is banned, one yellow card too many so United turned to Rooney. He was sent home from England duty, a ‘knee injury’ and nothing to whatsoever to do with his dance-floor gymnastics at the wedding party that he gate-crashed.
And whilst Arsenal laugh, they wait anxiously for Alexis Sanchez to return from Chile. With the biggest band aid that anyone has ever seen wrapped around his thigh, he scored twice in the win-or-bust World Cup qualifier against Uruguay. If he can pull off those heroics for his country, defeating Manchester United is child’s play. Surely?
Except for Arsenal it isn’t. Since September 2006 when they last won at Old Trafford in the Premier League, a vast array of top flight under-achievers have hit the jackpot and left Manchester with three points. West Ham, Aston Villa, West Bromwich Albion, Everton, Newcastle United, Sunderland, Swansea City, Norwich City, Southampton. For heaven’s sake, even Tottenham Hotspur have won there in the last decade.
Manchester United are there for the taking with just two wins in their last eight Premier League matches. Arsenal, unbeaten in ten with seven wins; red hot favourites but overwhelming underdogs in this fixture.
United’s back four was a three last time in Swansea and it may well be again with Chris Smalling out with a broken toe. Mesut Özil in the form of his life, is the Pied Piper of the Premier League but Ander Herrera? He is the man-marker, the bane of the artist’s life and one who has relished the responsibility Mourinho has given him.
And there, ignored by one and all despite his price tag, is Paul Pogba. The world’s most expensive footballer. If ever there was a game made for him, this is it. It is, isn’t it?
Maybe not. The unsung hero of the day may well be Francis Coquelin. Or Ashley Young.
That’s the absolute beauty of this match. The heroes come from anywhere; English football at its best.