When Can Chelsea Be Crowned Champions?

As the half-time whistle blew at the Emirates, Chelsea were a shambles. The players trudged from the pitch, 0 – 3 down, ready for an explosion from their newly-appointed manager, Antonio Conte. 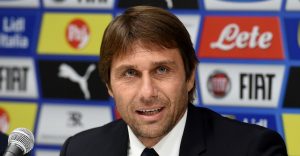 The Italian faced criticism as the Blues slumped to their third game without a win. Eighth place was an improvement on their 2015/16 finish but nowhere near for owner Roman Abramovich.
But the panic button wasn’t pressed. During the interval at Arsenal, Conte re-organized his defense, returning to his favoured back three. The Gunners didn’t score for the remaining forty-five minutes and neither did anyone else in the following six Premier League matches.
From there, they strode clear of the pack. One by one, rivals drifted away, dropping points. Chelsea were relentless; impressively so. Thirteen straight wins; one defeat in twenty-two games. Chelsea tickets, free and easy to obtain last season, are like gold dust.
And now they are on the cusp of securing the Premier League title.

Conte’s arrival was less celebrated than that of Pep Guardiola at Manchester City and not as newsworthy as Jose Mourinho’s across the city. It’s proved, however, to be as much of a catalyst.
The Italian managed Diego Costa back into form, reinvigorated Eden Hazard and performed the ultimate alchemy, turning David Luiz into a competent defender.
Among all this, Conte produced a masterstroke. Victor Moses, serial loanee, appeared on the right and has been a revelation. The Nigerian international as a wing-back, is enterprising but surprisingly aware.
Chelsea’s summer spending encapsulated Conte’s winds of change. N’Golo Kante, the pivot of Leicester’s title-winning midfield, arrived at Stamford Bridge and improved on the previous high standards he set.
Money well-spent, but also with a plan. Happy coincidence certainly; like so many managers, it took a moment in a season for Conte to make a momentous decision. Could Chelsea have rivalled Arsenal’s Invincibles if they had played this way from the start? It’s not beyond the realms of possibility but it’s a bar-room argument; supposition over supping a pint.

When Will The Title Return To Stamford Bridge?

It’s a question of when Chelsea are crowned champions, not if. Ten points clear of Tottenham and twelve of Manchester City, the Blues fans are counting backwards from the end of the season, working out when the trophy will bounce from player to player in celebration.
More importantly, they are making sure they have their Stamford Bridge tickets ready and waiting. If the gap doesn’t widen, the title will most likely be won at Goodison Park at the end of April.
Blues fans will be watching the North London Derby as closely as their own matches against Southampton and Middlesbrough at Stamford Bridge. Anything but a Tottenham win could see them crowned champions.
Don’t worry though, WOW Tickets has your bases covered. We have tickets for every Chelsea match and you can buy them, safe in the knowledge they are backed by our industry-leading 100% money back guarantee.