The World Cup is still months away, and there remain a few places left up for grabs. Eight teams in the UEFA confederation are vying for four spots at next June’s World Cup, and those places will be decided by the qualifying playoffs in November. 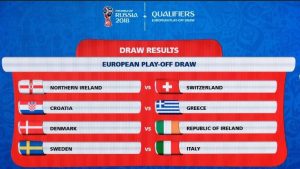 The two sides will meet on November 9th and 12th.

Two very tough teams will do battle in this one with a World Cup place on the line. Greece have done well with what they have, and are still known as a team that can play defensively. Croatia have the better playing talent. Despite Croatia’s talent, the national team is in trouble. The team sacked their coach, Ante Cacic, in the build up to the final qualifier. It worked out, but the entire national setup needs fixing. Greece’s qualifying campaign wasn’t spectacular, but it was good enough when it had to be. These two sides may be more evenly matched than anyone thinks.

Croatia and Greece will meet on November 9th and 12th.

Denmark vs. Republic of Ireland

Ireland are not great when their players are broken down, seperated and examined. However, it is the combination of each player that makes them an extremely difficult team to beat. Back in 2009, Ireland was so close to qualifying for the World Cup through the playoffs. Their second leg against France saw the famed “hand of frog” handball that resulted in the French qualifying and the Irish going home. This time it could be different, but Denmark shouldn’t be taken lightly. The Danes are superior when it comes to technical skill. Led by Tottenham’s Christian Eriksen, Demark are one of the best, if not the best, second-tier World Cup sides.

Denmark play Republic of Ireland on November 11th and 14th.

Italy are a former World Cup winner, four times to be exact, but the Italians may miss Russia 2018 completely. The Azzurri finished second in their qualifying group to Spain, there is no shame in that; however, the squad must now beat a good Sweden team to make it to Russia. Already this is being considered as the best playoff tie. The Italians haven’t been as good under Gian Piero Ventura as they were under Antonio Conte. The current coach must find a way to get his team through. Star strike Andrea Belotti is set to miss the playoffs due to injury. It could be a perfect storm for Italy to miss out. The national team have been unconvincing since winning it all in 2006. Sweden are in a similar boat, and need to find someone who can replace Zlatan Ibrahimovic. Without the striker, Sweden just don’t have the firepower to score goals.

Sweden take on Italy on November 10th and 13th. WoWTickets.football has your seat for both matches. Don’t miss this epic playoff fixture on the road to Russia 2018.