The German Bundesliga is one of the top five football leagues in Europe. Often, the Bundesliga is classed just behind the English Premier League and Spain’s La Liga as the most talented and exciting league.

Germany isn’t just home to a great football league, but it is home to the reigning World Cup champions. Many of the stars that make up the German national team ply their trades in the Bundesliga. For anyone planning a trip to Germany, there is a great chance they will see a number of world-class stars on show. These stars aren’t just from the World Cup winning German team, but from other nations as well.

While the talent is plentiful in Germany, the league also boasts some of the best, most modern stadiums in the world. Eight of the Bundesliga’s 18 stadiums were built after 2000. Despite 10 of the leagues stadiums being older, those venues have all been updated, and many feature aspects that set them apart from their British, Spanish or Italian counterparts. From standing terraces to retractable roofs, there is plenty to experience on a trip to Germany’s magically modern stadiums.

The Allianz Arena opened in 2005 and holds a capacity of 71,000-plus fans. It hasn’t just been home to Bayern Munich, but it also housed the club’s city rivals 1860 Munich. However, the club were relegated from the 2. Bundesliga in 2016-17. Since being demoted to the third-tier, 1860 have moved into the Grunwalder Stadion.

Bayern always put on a strong showing in the Bundesliga and Champions League, which makes the Allianz the perfect venue for fans wanting to soak up big time football matches in Germany. One trip to the stadium and there is a good chance you will be a Bayern fan for life.

Signal Iduna Park is iconic, and it is arguably the most visited stadium by English supporters that travel to Germany to watch games. Opened in 2006, Signal Iduna Park holds over 80,000 fans. The capacity of Borussia Dortmund’s home makes it the 13th largest football stadium in the world. Nothing is more intimidating than seeing the Yellow Wall unveil a tifo ahead of a Dortmund match. 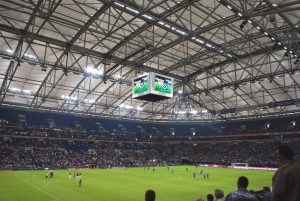 Schalke 04 are the life blood of Gelsenkirchen. This 61,000-plus capacity stadium features a retractable roof. But it isn’t just the roof that is retractable as the pitch can be moved outside the stadium. This allows it to get more natural light than if it remains inside the stadium. It also allows the venue to host multiple events.

Opened in 2001, Schalke’s fanbase is one of the most die-hard in all of European football. It is a great arena to watch a match, especially if Schalke are playing arch-rivals Borussia Dortmund. 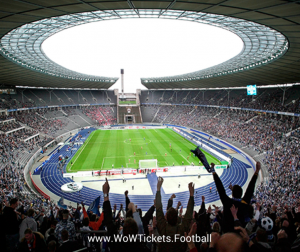 Berlin has often been called a capital city that doesn’t support its football club. That is arguable, but filling the 74,000-plus seat Olympiastadion would be a tough task for nearly any team. Opened in 1936, the Olympiastadion was created for the infamous 1936 Olympics.

The stadium was revamped over the years, but by the 1990s, many Germans wanted it torn down as it was a symbol of a past Berliners wanted to forget. In the end, the stadium was saved thanks to the 2006 World Cup, and €45 million were used to modernise the venue. It is an incredible stadium, and one worth seeing a football match in at least once.

Borussia Mochengladbach were the German team of the 1970s. The Foals won the Bundesliga five times between 1970 and 1977. In the years the team didn’t win, they were regularly runners up during the decade. Monchengladbach also lifted the UEFA Cup twice during the decade, making them Germany’s most glamorous team before Bayern took that crown in the 1980s.

Monchengladbach’s Borussia Park opened in 2004 and holds 54,057. Located at the midway point between Dusseldorf and the Netherlands border, the club is located in the beautiful medieval town of Monchengladbach, and is certainly not to be missed.