The Champions League group stage concluded this week, and 16 teams have booked their places in the knockout round. 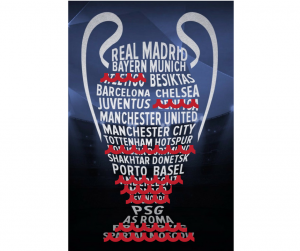 Amazingly, all five English Premier League teams have qualified for the last 16. Tottenham, Liverpool, Manchester United and Manchester City all finished top of their groups. Chelsea were the only side not to win their group, as the Blues were pipped by Roma in the end for the top spot in group C.

Reigning Champions League winners, Real Madrid, finished behind Tottenham in group H. The team’s second place finish now makes them a difficult proposition in the next round for whichever team they face. It can’t be denied that Real Madrid are not the team they were a season ago. Currently in fourth place in La Liga, the team are eight points behind first place Barcelona.

Barcelona, Spain’s second of three teams to qualify for the next round, topped group D. Juventus finished right behind the La Liga leaders. The Bianconeri suffered just one defeat, and will be a difficult team for any group winner to play.

Sevilla were La Liga’s other team to qualify for the knockout round. The team finished behind Liverpool in group E. Sevilla’s 5-1 loss to Spartak Moscow on matchday 3 seemed like an anomaly, and due to the loss, the Spanish side finished behind the Reds.

Who will win the Champions League?

Sports odds and calculations website FiveThirtyEight has listed odds for each team to win the Champions League. The website has listed Barcelona as having the best probability of winning the tournament’s top prize. Barcelona are listed as 19% likely to win the Champions League. PSG are a close second at 15%. Real Madrid and Bayern are both given odds in double digits at 15% and 14%, respectively.

Of the Premier League sides, Manchester City have the best projection of winning the tournament. Pep Guardiola’s side are 9% likely to lift the trophy.

The last 16 draw will take place on Monday December 11. The teams will know their fates and the knockout games will begin on February 13 and 14.

Want to be at the Champions League last 16 games?

Once the Champions League last 16 draw has been made, WoWTickets.Football will have tickets to all the matches. Once your team has been drawn, be should to contact us for the best seats available.