Barcelona crashed out of the Champions League in midweek as the Catalans conceded three goals to Roma. The club were eliminated thanks to the away goals rule although the two-legged series finished 4-4. Barcelona were toothless during the second match, and for much of the first leg, Roma outclassed the Spanish team despite losing. Now with Barcelona out of the competition and the team looking lifeless when Lionel Messi isn’t on form, there is a question over whether the club can win without the Argentine. 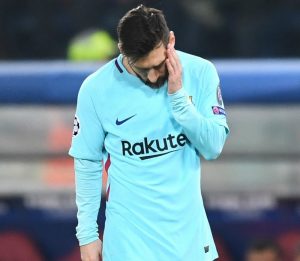 Messi has had a hand in over half of all Barcelona La Liga goals. The attacking midfielder has tallied 12 assists to go along with 29 goals. His stats once again show just how strong of a player he is, but in the Champions League knockout stages, Messi’s influence on the team showed Barcelona as a whole is weak.

Against Chelsea in the last-16, Messi played a part in every goal scored by the team. Messi saved Barcelona in the first leg and made up for the side’s poor performance. In the second leg, the Argentine scored twice and set up Ousamane Dembele’s goals. Without him, Chelsea would have gone through thanks to their first leg score.

In the quarterfinal first leg, Roma killed themselves with two own goals as Barcelona were far from worthy of the 4-1 scoreline the game ended in. Roma were rampant in front of a fervent fan base in the second leg and Barcelona had no answer for them. Messi was misfiring and his teammates were unable to step up their game without the Argentine hitting his usual heights.

After the team’s collapse in Rome, rumours have once again surfaced that Messi will join Manchester City. The Blues’ manager Pep Guardiola had his greatest successes while coaching Messi at Barcelona. Without Guardiola, Messi wouldn’t have hit the footballing heights he did. Of course, Messi is a world-class player, but the two worked well together and achieved unparalleled success that neither would have achieved seperately.

Messi is still considered one of the two best players in the world, but it can’t be denied he is disappearing more and more from Barcelona’s big games. Since winning the Champions League in 2016, Barcelona have twice gone out at the quarterfinal stage. The team are still one of the top sides in La Liga, but the Catalans’ defeat to Roma showed just how weak much of La Liga is.

Messi’s influence over Barcelona isn’t the only place the Argentine’s power is slipping. Argentina just qualified for the World Cup and the team would have missed out if it hadn’t been for a Messi superhero performance on the final day of qualifying. That is forgotten about now that the team will be in Russia, but like Barcelona, the future looks bleak once Messi leaves the side.