Liverpool have drawn Roma in the Champions League semifinal after successfully banishing Manchester City from the competition. Liverpool have been an exciting side throughout the tournament and currently lead the Champions League in goals scored with 33. However, the side will be challenged by a strong Roma team that will be buoyed by their amazing come from behind aggregate win over Barcelona in the quarterfinals. 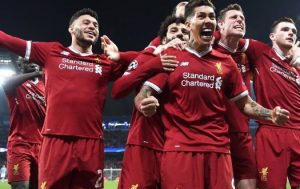 Liverpool defeated Manchester City in the quarterfinals thanks to a strong first leg that saw the Reds win 3-0. Jurgen Klopp’s team overcame an early deficit in the second leg to beat Manchester City 2-1 and stamp their ticket to the last four. Liverpool not only outlasted Manchester City’s strong attack, but the Reds advanced despite mounting injury problems.

Liverpool’s two-legged series against Roma will be very similar to the Europa League final the Reds played in 2016 against Sevilla. At that time, Liverpool were the heavy favourites and many supporters seemed to believe the match was won before kickoff. However, Sevilla outclassed Liverpool during the 90 minute affair and showed just why the Spanish club had won the competition the two previous seasons. In the end, Liverpool lost 3-1 to Sevilla on the night and Klopp’s chance of winning his first major trophy with the Reds slipped through his hands.

Roma are currently fourth in Serie A and just holding on to the final Champions League place. The team’s form has been good, but Roma haven’t been the force in Italy this term that they had been in years prior. Regardless, Roma are still one of the top sides on the peninsula and Liverpool will need to be far more wary of the Giallorossi than they were against Sevilla two years ago.

Klopp could see some of his injury problems ease as the semifinal approaches on April 24. Midfielders Adam Lallana and Emre Can could be fit to feature for the Reds. With the team qualifying for the last four, it will give both players an incentive to get back in the team. If neither are fit enough for the first leg, there is the option for them to be back for the second leg or the final.

If Liverpool can get past Roma and into their first Champions League final since 2007, Bayern Munich or Real Madrid will be on the other side. The two powerhouses were drawn against each other in the semifinal as well. Madrid escaped a scare at the hands of Juventus in the quarterfinal while Bayern were nothing less than professional in their aggregate win over Sevilla.

Will Liverpool make it to Kyiv for the May 26 final? They must go through Roma and it all starts at Anfield in the first leg on April 24.