Liverpool will appear in their eighth Champions League/European Cup final on May 26. The Reds will meet Real Madrid for the right to be called Champions of Europe. 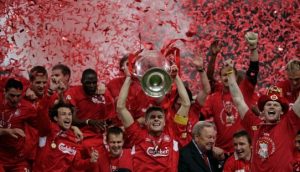 Liverpool have lifted five European Cups previously, while losing two heartbreaking finals. This year’s final in Kiev will see Jurgen Klopp’s side attempt to beat Real Madrid. The competition has been owned by Zinedine Zidane’s side of late, and this year, the club is aiming for its third straight European Cup final victory.

With the Champions League taking place Saturday May 26, here is a look back at Liverpool’s previous seven attempts at winning the European Cup.

If Liverpool were the English team of the 1970s, then Borussia Monchengladbach were the German team of the same decade. The two clubs met for the final in Rome at the Stadio Olimpico. Despite Liverpool leading at halftime through Terry McDermott, Borussia levelled just after the break through Allan Simonsen. The Reds rallied with goals from Tommy Smith and Phil Neal in the final 26 minutes to claim their first European Cup.

Liverpool were back in the European Cup final a season later. This time, the opposition was Belgium’s Club Brugge. In front of more than 92,000 fans at Wembley Stadium, Liverpool edge a stubborn Brugge, 1-0, thanks to a Kenny Dalglish goal.

Three seasons later, Liverpool were once again in the final. Real Madrid met the Reds in Paris at the Parc des Princes to determine the European champion. The match was a battle of tactics, and for nearly an hour and a half, neither side could get an upper-hand. Finally, on 82 minutes, Liverpool left-back Alan Kennedy broke the deadlock and Madrid hearts. The win gave Liverpool manager Bob Paisley his third European Cup win, making him the first manager to achieve the feat.

Liverpool met Roma in the Italian team’s home stadium, the Stadio Olimpico, in May 1984. The stadium had already been a site of success for the Reds, and the final against the Giallorossi would be no different. However, this final would be Liverpool’s first to go to penalties. After ending deadlocked at one thanks to goals from Liverpool’s Phil Neal and Roma’s Roberto Pruzzo, the Reds prevailed in a dramatic shootout, 4-2. The final’s shootout is much remembered for Liverpool goalkeeper Bruce Grobbelaar’s wobbly knees putting off the Roma penalty takers.

The Reds once again obtained a place in the European Cup final in back-to-back seasons. This time, the opponent was Italy’s Juventus, and the match was played at Belgium’s Heysel. The match isn’t remembered for the game played between the two teams, but for the crowd trouble and stadium collapse that saw 39 fans lose their lives. The result of the match was less important than the lives of the supporters, and in the end, Juventus won 1-0 thanks to a Michel Platini penalty. English teams were banned from European competition following the tournament and it wouldn’t be until 1999 that a team from England would return to the final.

After 20 years away from the European Cup final, Liverpool returned in 2005. Under Rafael Benitez, Liverpool’s appearance in the final was unexpected, but the team had become known for putting on some of the most exciting displays in the competition. The 2005 produced what is called the most dramatic in the tournament’s history. Down 3-0 at halftime, the Reds scored three times in the second half to force extra-time. After 30 minutes, the teams went to penalties where Liverpool prevailed 3-2.

Two years later, Liverpool were back in the Champions League final and so was AC Milan. Benitez’s team were once again sluggish to start the match and on the stroke of halftime, Milan’s Filippo Inzaghi put the Italians up a goal. Less than 40 minutes later, Inzaghi got a second. Dirk Kuyt scored a consolation goal for Liverpool, but the team looked fatigued throughout and Milan exacted their revenge on the Reds.