The Premier League at Christmas – The Gift Which Keeps On Giving | boxing day football, christmas football 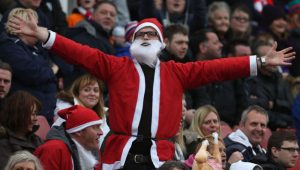 The holiday season is a unique time in the Premier League. While the rest of Europe’s major leagues hibernate, English football’s top-flight keeps the action coming thick and fast.

At WoWtickets.football, we set your mind at rest with tickets available for all the Boxing day through New Year’s Day key matches. Be sure to move quickly and grab your seats to make this a holiday season to remember!

We look ahead to some of the key fixtures affecting the title race and relegation battle.

This could be one of the last chances you get to see Tottenham at Wembley with the new Tottenham Stadium targeted for opening very soon. Don’t miss out on your chance to be a part of history – get your tickets spurs tickets here!

Mauricio Pochettino’s team are flying high; a fixture in the top five of the Premier League and closing on a place in the knockout stages of the Champions League. There is quality in every position on the field from the World Cup winning goalkeeper Hugo Lloris through Dele Alli, Christian Eriksen and England captain Harry Kane.

Bournemouth’s passing game is pleasing on the eye and the open spaces of Wembley should suit them. The Cherries are enjoying their best-ever season in the top flight, rewarding Eddie Howe’s belief in playing football the right way.

These two sides always see lots of goals in the games making this an unmissable festive fixture.

It’s a fixture steeped in history with the two clubs enjoying a resurgence this season. They were inseparable at the Emirates in November when they fought out a pulsating 1 – 1 draw. Unai Emery is proving a hit with the Gunners faithful and the Kop’s adulation for Jurgen Klopp knows no bounds.

This is a fixture where there are sure to be goals. Liverpool’s Mo Salah, Sadio Mane and Roberto Firmino know where the goal is while the pairing of Pierre-Emerick Aubameyang and Alexandre Lacazette are not shy of taking chances.

With that firepower on display, it’s a question of which creaking defence cracks first to find the winners! Dare you miss out on this game? check out Liverpool v Arsenal ticket prices here.

What better way to finish off the year than with a London derby? Crystal Palace are always a tough nut to crack on their own turf while Chelsea are London’s top club in recent years.

Roy Hodgson’s Palace are showing signs that they will win their fight against relegation this season but need three points from this fixture to instil self-belief. Having taken a point off high-flying Arsenal, the Eagles know they can stand toe-to-toe with the best England has to offer.

Recent matches saw fireworks between these two making this a must-see fixture. We’ve got your ticketing needs covered!

An epic clash to finish off the festive period and a match which may go a long way to deciding where the Premier League title will end up. City are the leading scorers in the division, Liverpool’s defence is the most miserly; something must give.

Jurgen Klopp’s team are doggedly hanging onto City’s coat-tails but the gap refuses to grow, no matter how well Pep Guardiola’s side play. The Reds win in the Merseyside derby underlines Liverpool’s determination; 96 minutes played and Divock Origi is still chasing down the ball. No wonder Klopp ran on the pitch like the Reds had won a cup semi-final.

WoWtickets.football has both Liverpool and Man city tickets available for the game – don’t miss out on this top of the table clash

Click on the links to check out our ticket availability for these EPL fixtures: