According to research, the average British male watches seven hours of football during the holiday period. The number is astonishing, although its obvious that football lovers have more 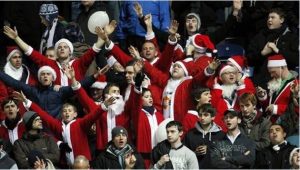 time to devote to the beautiful game over the festive period.

In particular, Boxing Day is the biggest day of the holiday season for fans to watch games. Why is Boxing Day such a big day in England? It is simple. For one, England’s football leagues have had a tradition of playing matches the day after Christmas. Think of it as a gift for the fans the day after Santa delivered presents to all the good little boys and girls around the world. That tradition has continued throughout the decades and fans flock to the games. Games bring fans, friends and families together, especially for those people who only return to their hometowns a few times a year.

England is unique in the football world as it is the only country that doesn’t take a winter break. Germany, France, Italy, Spain and many more take the festive period off; but England powers through it, giving fans plenty of reason to go see a live fixtures.

In 2016, Boxing Day (round 18) had the highest percentage of capacity in stadiums compared to the 17 previous weeks. According to Inside World Football, less than 9,000 seats combined throughout the 10 Premier League fixtures played on Boxing Day were left empty. That is an amazing number of filled seats.

The holiday season in 20232-23 will present a packed week and a half of Premier League action that kicks off on Monday December 26th after a break for the world cup games with Arsenal playing against West ham and Crystal Palace paying against Fulham. On the following 2 days, the Boxing Day fixtures will be played with Chelsea, Man united and Leeds all hosting matches. From Friday, December 30th until Sunday, New Year’s day teams will tangle once more with Liverpool, West ham, Fulham, Man city and Tottenham  Liverpool and Leicester City highlighting that fixture list. It isn’t over yet, for whomever have missed, was busy or just didn’t have enough of good football – Chelsea vs Man city is waiting on Thursday Jan 5th. For anyone that loves football, the holiday season, especially Boxing Day, can’t be missed.