Real Madrid are having a very un-Real Madrid season. Last term, Los Blancos stormed to the La Liga and Champions League trophies. Yet, the 2017-18 season has seen the team fail to reach the heights it did a year ago. 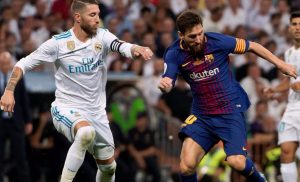 Zinedine Zidane’s men have already won two trophies this term. The UEFA Super Cup and the FIFA World Club Cup are in the team’s possession. However, if Real Madrid want to secure any more silver this season, the team will need to improve its play immediately. It isn’t just the team that needs to pick up its performances. The club desperately need to add players to the fold to improve the side during the transfer window.

Can Real Madrid overcome their El Clasico defeat to Barcelona?

Real Madrid sit in fourth place in La Liga and won’t return to play in the league until January 7 against Celta Vigo. Los Blancos are 14 points behind Barcelona, and some feel the club is best served just focusing on the Copa del Rey or the Champions League now.

Coming off of a 3-0 loss at home to arch rivals Barcelona was embarrassing, and one of the biggest lows the club has faced in some time. The loss was the team’s third of the season already; which equals last season’s mark.

It’s easy to look at Real Madrid and come to the conclusion that the side is stuck in fourth due to its reliance on Cristiano Ronaldo. But that would be short changing the rest of the team’s problems. Firstly, Zidane’s team isn’t scoring goals. Real Madrid are joint-third in goals scored in La Liga with 30. The mighty Madrid are level with Celta Vigo in goals scored.

Making things worse is Ronaldo’s four goals scored in La Liga. Last term, Ronaldo scored 25 goals in the Spanish top-flight. The reigning Ballon d’Or winner has been a letdown for the team. However, it may be forgotten that Ronaldo expressed his desire to leave the club before the start of the season.

Ronaldo’s form is one of the team’s biggest problems, but the club’s lack of activity in the transfer market during the offseason is now coming back to haunt it. Real Madrid were hellbent on signing Kylian Mbappe from Monaco. The club was so interested in the teenage phenom that it sold Alvaro Morata, loaned out James Rodriguez to Bayern Munich and sold defender Danilo to Manchester City. The hope was to raise fund for Mbappe, but in the end the team sold talented players it now needs. In addition, Real Madrid didn’t replace those players that left. The squad didn’t get freshened up. The moves the team made in the summer, or didn’t make for that matter, are now costing it dearly.

Madrid need to have a big second half of the season, but with the way Barcelona are going, it doesn’t look likely Zidane’s side will repeat as La Liga champions. There is still the Copa del Rey and Champions League, which Madrid still have a chance of winning both competitions.

What to see the great action from La Liga this season? Don’t miss a minute of the action at the Bernabeu or Camp Nou. www.WoWTickets.Football has your ticket to see a great game in Spain.